Let It Go, the beginning of a new chapter for HUTCH

His newest single, “Let it Go”, signals the beginning of a new chapter in his life, Hutch is currently riding the wave of a tremendous comeback.

A talented writer and musician, Chris Hutchison, aka HUTCH, is a man full of surprises, unapologetically a blend of country, pop and a little bit of the Gold Coast thrown in.
When he’s not watching his son perform at school (clearly, the apple doesn’t fall too far from the tree), playing a round of golf or spending time with his loved ones. You will likely find Hutch in his purpose-built studio at home, pumping out the hottest sounds in country, pop and rock right now.

His newest single, “Let it Go”, signals the beginning of a new chapter in his life, Hutch is currently riding the wave of a tremendous comeback.

The Gold Coast probably isn’t the first place one would usually look or expect to find one of the hottest country music sounds on Spotify right now; “I went to school in Gympie and grew up on the Gold Coast, and I guess you can take the boy out of the country, but you can’t take the country out of the boy”.
Hutch’s early years were influenced by a variety of different artists, as well as his Mum’s own musical taste; “Mum loves Keith Urban”, he laughs. That results in an unmistakably authentic sound that is a catchy cocktail of pop, rock, and country.

Although, when asked about his sound and whether the path to country music was always the plan, he says it wasn’t. “My sound is just Hutch, “I don’t sit down and think, ok, I need to write a country song or make it big and tour overseas. My goal is to just write and play the music that is me”.

Hutch is no stranger to the music scene; he toured heavily in the early 2000s with the likes of Aussie music greats Guy Sebastian, Shannon Noll, and Thirsty Merc. He has an impressive resume of music, releasing a highly successful CD and playing to sold-out shows with his edgy, country rock sound.

Growing up, his parents were always supportive of his music career, “they were very wise” in ensuring he had a backup, encouraging him to get a trade. This wisdom would prove prophetic decades later.

After stepping away from touring and the big stage and taking time away to raise his son Cruise, Hutch’s big comeback almost didn’t happen, thanks to the global shutdown of COVID-19 and a few uncertain years for the entertainment industry.
But his hard-working country boy ethic wasn’t going to let something as small ( cough cough) as a global pandemic get in his way.

Hutch decided to solve the problem of not being able to get into the studio for over a year by getting creative. With the help of his brother, he built his own studio and learned how to produce and record music from home, all while raising Cruze solo. “He’s a really good kid; he will sit and just watch and listen to me record in the studio; and has a guitar that he knows a few chords on… he loves the music just as much as I do”.

“Let It Go” is the product of years of uncertainties in life, from relationship breakdowns, raising a child as a single Dad, and overcoming the constant hits to the entertainment industry over the past few years. The song is catchy with Hutch’s signature gravelly vocals and crystal-clear production.
Although many have claimed it’s the best song he’s ever written and recorded, Hutch coyly hints that the best is yet to come, hopefully around September. Whether or not we can expect an album or another single, Hutch isn’t telling.

Stay tuned as we will be the first to bring you any news on Hutch’s new music.

You can listen to HUTCH’s new single Let it Go now on Spotify, Apple Music or follow him on socials below. 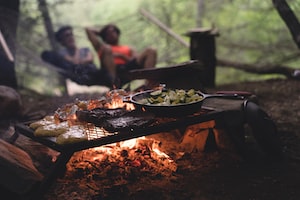 
Protein, Preserves & More: What to Look For In Camping Foods